A new railway line from West Sunbury to Cranbourne / Pakenham in the southeast is under construction and will cost approximately $ 11 billion.
The project includes a 9-kilometre double tunnel, high-capacity trains and five new underground stations. CITY LOOP will be unblocked, allowing more trains to travel in Melbourne.

Melbourne Metro said the project is expected to open to traffic in 2025.

3.State Library (at the northern end of Swanston Street)

4. City Hall (at the southern end of Swanston Street)

In August 2017, the Prime Minister approved a proposal for the names of five new subway tunnel stations. And gradually carry out design and planning.

Each of these five stations is designed with local unique features in mind. 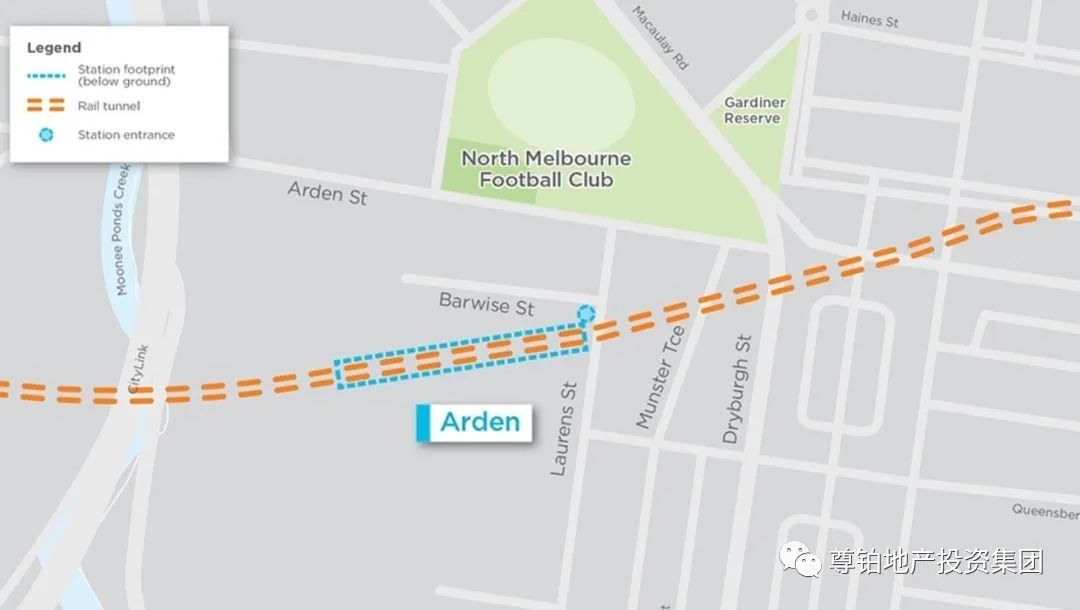 Over the next 30 years, the area is expected to be home to 15,000 new residents and more than 34,000 jobs. These areas will be directly connected to the train network via subway tunnels, providing convenience to residents. 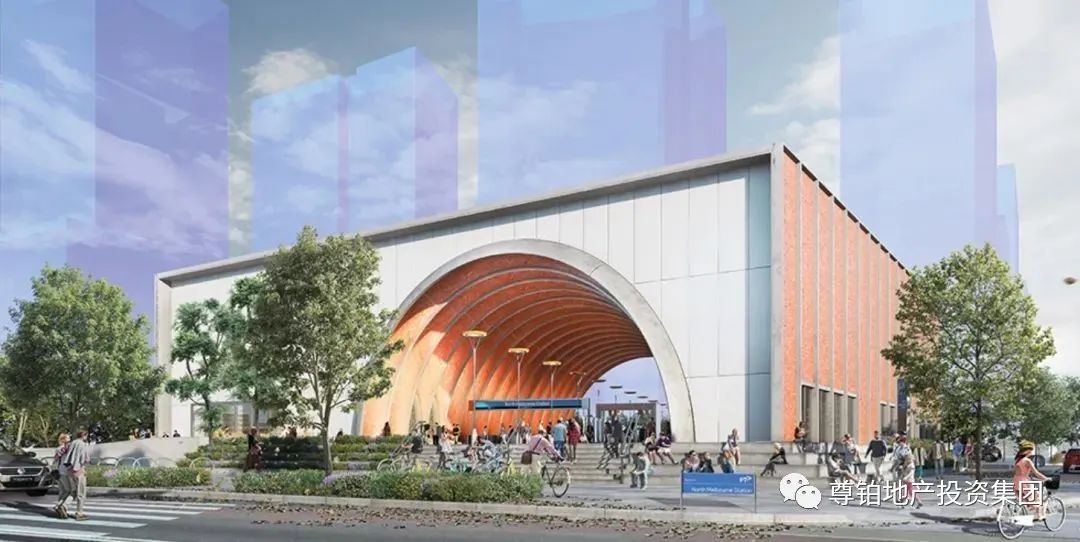 The station will build a cafe, as well as a terrace for outdoor dining, public seating, a garden, etc. The new station square will provide a bright, safe and intimate gathering place for passengers and community residents

Arden train station will be in the North Melbourne Entertainment Centre. There are dedicated walkways on Arden Street, Laurens Street and Queensberry Street, with more than 120 bicycle parking spaces and parking spaces near the station entrance. Passengers can easily walk, bike or travel to the station. 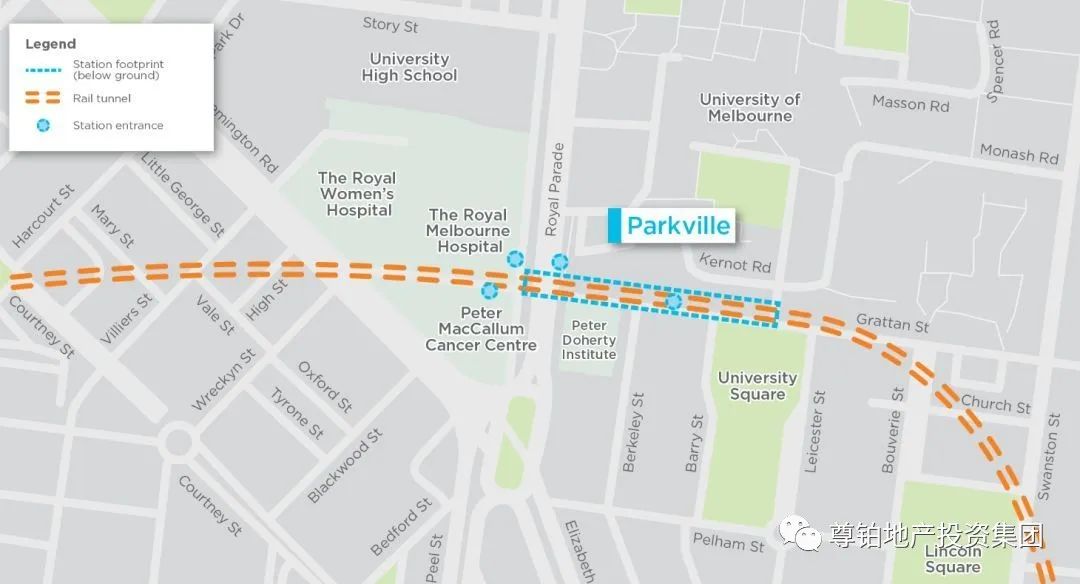 For the first time, it will provide direct train traffic to the area to ease the strain on local trams and roads.

Parkville Station will be built directly below Grattan Street between Royal Parad and Leicester Street. There will be four entrances to facilitate people’s daily travel. 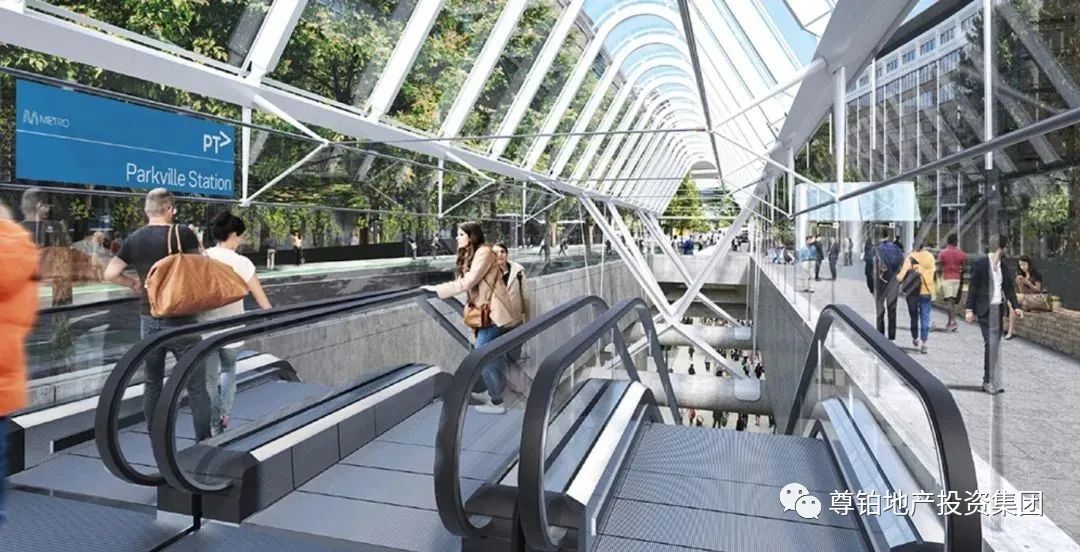 The design of the new Parkville station area will turn Grattan Street into a “great promenade” among some of Victoria’s renowned institutions.

The main entrance of the station, located north of Grattan Street on the outskirts of the University of Melbourne, features a 50-meter-long glass and steel canopy that directs natural light into the station lobby. Through the light well, natural light is maximized and penetrates into the site below. The entrance is designed to be located in the bushes and integrate into the surrounding environment.

The reconfigured Grattan Street will have only one lane in each direction to allow for sidewalks and dedicated bicycle lanes. This street will be planted with new green plants to beautify the environment.

New tram stops at the corners of Grattan Street and Royal Parade will provide passengers with a higher level of convenience, including service information platforms and wheelchair access.

The State Library Station at the north end of Swenstion Street will improve congestion to and meet some of Melbourne’s most popular areas, including the State Library of Victoria, RMIT and Queen Victoria Market Growing number of students.

The new State Library Station will be located below Swanston Street, between La Trobe Street and Franklin Street. It will lead directly to Melbourne Central Station, allowing commuters to easily switch back and forth between the Metro Tunnel and the City Loop train.

The new station will have three entrances.

The new State Library Station will be the north gate to the city center, and the surrounding area will be transformed to provide better space for pedestrians, cyclists, and occupants.

Franklin Street will be transformed into a pedestrian promenade between Victoria Street and Stewart Streets, and the sidewalks will become wider with dedicated bicycle lanes and speed bumps. The south side of the street will expand into a linear park where there will be social, outdoor dining, gardens and public art venues.

The existing lanes of Literature Lane and Stewart Street will be expanded to facilitate connection to the new station, and new walking routes will be created to allow even pedestrians around the area.

A’Beckett Street between Stewart Street and Swanston Street will be permanently banned and a new public space will be created including entertainment facilities and a new outdoor dining area.

The new Town Hall Station at the southern end of Swanston Street will improve tourists and residents’ access to some of Melbourne’s iconic destinations, including Federation Square, the South Bank, the Arts Centre, St. Paul’s Cathedral and other culturally significant landmarks.

The new Town Hall Station will be located below Swanston Street, between Flinders Street and Collins Street. It has access to Flinders Station, allowing commuters to switch freely between subway tunnels and city ring train services.

When the new station is completed, the city square will serve as a venue for public gatherings and events.

The station entrance at the northern end of the city square expands the view of Melbourne City Hall and Collins Street, and combines the rebuilt Mockridge fountain as an open entrance.

Open spaces will be provided to the city square centre for celebrations. The raised edges on the square make it easy for passersby to sit and enjoy the views of St Paul’s Cathedral and Melbourne City Hall while resting.

The new city square will have shops and cafes, as well as spaces for outdoor dining.

Town Hall Station will connect to a bustling network of lanes, not only to create new pedestrian routes, but to evenly distribute traffic around the new platform.

The station is strategically located to relieve pressure on St Kilda Road / Swanston Street, the busiest tram line. On a new tramway on St Kilda Road, there will be a junction of trains and trams to make it easier for people to choose between them.

The station will serve thousands of employed and resident people along St Kilda Road daily and support the continued growth and reconstruction of the South Melbourne / Kings Way area.

Anzac Station is located directly below St Kilda Road, near the intersection of Albert Road and Domain Road. There are four entrances to the subway station.

The converted St Kilda Road has shelters that allow passengers to easily take trains and trams.

Anzac Station is designed as a “park pavilion” that seamlessly connects to the surrounding parkland.

The canopy above the overpass will become the focal point of the building, providing sheltering passengers from wind and rain. A large skylight embedded in the tram station illuminates natural light to the station hall below, making the station brighter.